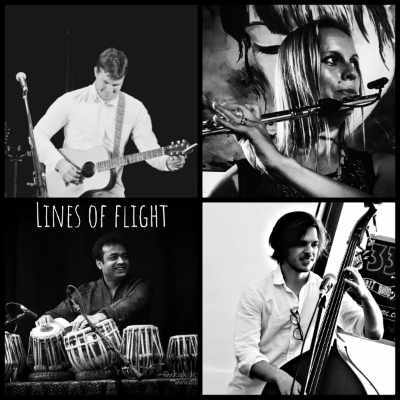 Bolts of pent-up energy, surging, breaking, exploding - 'lines of flight' describes the creative potential of not just breaking away from the norm but shooting in an unexpected and refreshing direction. This is the approach taken by Brent Keogh (vox, mandolin, oud, guitar) and Katie Anderson (vox, flute, Irish whistle, percussion) to their music.

With their unique and earthy infusion of folk, world, classical and pop influences, 'Lines of Flight' have been performing alongside the likes of multi-award winning Canadian folk duo Madison Violet, Monique Clare (Folk Alliance Artist of the Year), Nigel Wearne, Kool Vibration, and Arabesk.

Joined by Oscar Brown on double bass and Maharshi Raval on tabla, Lines of Flight unearths the hidden gems of the world’s acoustic sounds, taking you on a sonic journey that is at once familiar and completely unexpected.

"Gorgeous!" - Stuart Coupe, Tune Up, FBi Radio, 94.5
"From the first note, Lines of Flight owned the room and treated us to a delicious musical narrative" - Calvin Welch, iHear Music, @Lazybones